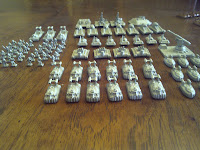 So both my Combine and PanEuropean armies are coming along nicely. I’ve divided both armies into two sections, each with a separate paint scheme, to allow for team play.

I decided to paint all the figures, even those I had previously painted before, just to make sure that the two sections in each army looked consistent. And it was a good thing too, as the paint I previously used was nowhere to be found. 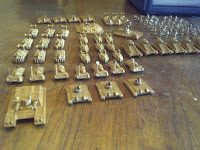 The PanEuropean forces were done in a light gray (lighter than the glossy gray I had done some of them in earlier) and a sort of reddish brown.

The Combine units are half in a light desert tan that will look awesome if I can manage dark brown camouflage stripes, and half in a dark green that’s not quite olive, but is marketed as “U.S. World War II Armor”. I’m not sure about that necessarily, but it does look pretty nice. 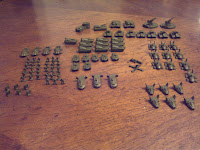 Next comes the detailing, and I have a week to do both that for all for forces and assemble and paint the 7 Ogres. Detailing will consist of painting the treads and plenum skirts black, windshields a sort of periwinkle (which looks really nice as windshields), and missiles white and red. I might do a few other things here and there, but nothing too fancy. Infantry will get a color to match the infantry bases, some black on their guns, and a few units will get color on their jump-packs to indicate their status as marines or engineers in certain scenarios. If I’ve got the time, that is; that last is something of a luxury. 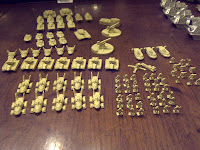 The Ogres are going to be another story entirely. I found an epoxy putty that the nice man at the hardware store assured me would hold, and I’m going to be embedding some “rebar” to make sure of it. I bought the hand drill that some commenters had recommended, but looking at it, I just have to say… no. Not me.

Things are really coming together nicely. These babies will really look awesome on the terrain boards at the FLGS next weekend. Full reports, of course, when the time comes! Also, I’ll be running a game at Dexcon, and a loyal reader has invited me to do another at NJCon. The first is definite, and the second is a “I’m definitely thinking about it.” If I decide to do it, I’ll naturally announce it here.

Question for the audience: Does anyone have a model of a Mark IV or Mark VI Ogre, or a Dopplesoldner they’d be willing to part with? I can make do with my existing figures, but I’d like to have the real thing, if possible.

2 thoughts on “The Ogre Project, Part III – Base Coat”