Sometimes wargames are not about who wins

November 26, 2009April 25, 2018 Greyhawk GrognardUncategorizedWargames1 Comment on Sometimes wargames are not about who wins

When it came to three of my favorite games from my youth, there was absolutely no question of who would win. We went into them knowing that the Allies would win AH’s Afrika Korps, Sauron would lose SPI’s War of the Ring, and NATO would win SPI’s World War 3. (The victor of AH’s Third Reich depended on which edition of the game you were playing; Avalon Hill kept over-compensating with each successive edition, so that the Axis always won first edition, the allies always won second, etc.) But we spent hours and hours bent over those maps, shuffling counters around, and not caring one bit.

Why? Well, there was the long-shot chance that a clever strategy (or, more likely, either lucky dice or a bone-headed mistake, and I saw it happen in all of these games) would give the predestined loser a fighting chance. But a lot of the time, those games were simply played for the sake of the game. 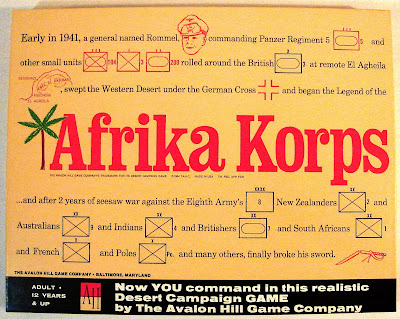 Afrika Korps, for example, is a flat-out race for the Axis player. Can he capture Tobruk and get the game in-hand before the overwhelming mass of Allied reinforcements comes in mid-game? If the Allies play at least a halfway decent stalling game, they’ve got it sewn up. But before those reinforcements come in, the game is a fascinating display of how to maneuver and compensate for limited resources on both sides. After that, it’s only a fascinating display of limited resources on the Axis side… 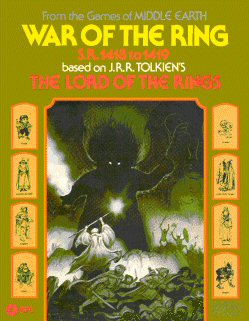 For War of the Ring, it’s nigh-unto inevitable that the Free Peoples will be able to plop the Ring in Mount Doom. The real game was the maneuvering beforehand; it was a hoot as the Sauron player to send hordes of Southrons into Gondor, sweeping all before them, while Wainriders overran Long Lake and the pitiful dwarven defenders of the Lonely Mountain. But short of a few really lucky encounters against the Fellowship (like a Balrog turning up where the Barrow-Wights belonged), it was an exercise in siege warfare until Frodo made it to the magic hex. Even “Boromir Attempts to Seize the Ring” wasn’t any great help; Boromir just turned into the character marching towards Mount Doom, and he was better able to defend himself.

Oh, World War 3. One of the vast line of NATO-Warsaw Pact set pieces SPI produced in the 1970’s. This one was on a global scale, with counters representing entire armies. It played much like World War 2 with Russians as the bad guys instead of Germans, and have the Russians steamroller over western Europe, only to be stymied by their complete lack of naval power (thus turning England once more into America’s staging area), but ultimately the NATO economic juggernaut proved too much for the Soviets. At which time, if you were playing using the optional nuclear warfare rules, the Soviet player simply launched all his ICBMs and the game ended in an apocalyptic draw. They didn’t even bother to include a Soviet aircraft carrier counter. The ocean was that much of a non-starter strategy for the USSR.

But even so, the fun part was playing up to the point of inevitable doom. There was a tipping point to each of those games before which they were really enjoyable. Then one side or the other slid down precipitously. But man, it was a fun ride while it lasted. At the time, I didn’t really have the wherewithal to try to balance them out. It might be fun to try. Anyone want to buy me a copy of SPI’s War of the Ring for Yule this year so I can give it a whirl?

1 thought on “Sometimes wargames are not about who wins”