Today’s WotC article on mapping and scales for maps inspired me to take a crack at a topic that is dear and dear to many OSR-folks’ hearts; the hex crawl (I should also point out that it inspired Rob Conley to go into lots of detail on the mechanics of hexes and hex grids, which is also well worth reading).

Hex crawls are at their best when they are set in some wilderness area that is relatively unknown to civilization. Usually on a borderland of some sort (ahem), part of the attraction of the hex crawl is the discovery of the unknown, mapping out features of the wild, and expanding the boundaries of civilization. 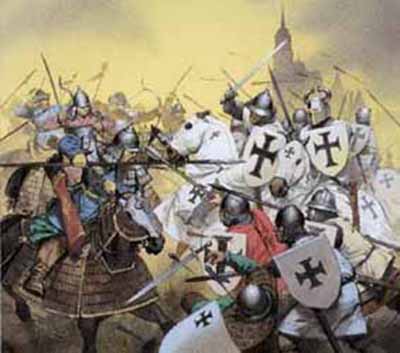 That’s a little harder to do in a place like the Flanaess, where we have an enormous, continent-scale map that shows us what’s on the other side of the borderland. Except at the very peripheries such as Hepmonaland, the Amedio Jungle, and the northern reaches past the Bandit Kingdoms, Horned Society, and Iuz, one gets the impression that all is relatively civilized (or, at least claimed by civilization). There are no vast wilderness border regions like Rome had with Germania, or an easy place where one can mark the end of “Christendom” as was seen in Prussia and the Teutonic Knights who protected against, and expanded into, eastern Poland and the then-Pagan kingdoms of Lithuania and Livonia.

Part of the question of hex crawls in Greyhawk revolves around just how big an area is needed for a satisfying hex-crawl. Rob Conley suggests something on the order of 150×200 miles (which, on the map of the Flanaess, would make it some 5×7 hexes, which is almost nation-sized), while the Welsh Piper goes the opposite direction, starting small with but a single 30-mile hex and possibly going up to 4×5 hexes as a region. By Flanaess standards, 4×5 hexes is still pretty big, but possibly workable.

Still, there are places within the Flanaess that are still suitable for hex-crawl play, some even at the larger scales suggested above. Setting aside for the moment the idea that the PCs are the first civilized people to set foot in the place for the last hundred years, there are still plenty of out-of-the-way border regions that could be turned into excellent hex-crawls. Of course, one could put a hex crawl almost anywhere and just declare the region to be wild and abandoned, but certain areas particularly lend themselves to such play.

The southern Dreadwood and eastern Hool Marshes, between Keoland and the Sea Princes, is one such place. Most regular overland travel is going to be way to the west skirting the marshes as much as they can, and the majority of traffic to and from the Sea Princes is going to be by sea in any case. Westkeep, Monmurg, and Gradsul are all nearby to serve as bases for explorers.

The Vast Swamp is an obvious choice, but should still be mentioned, as there could (and doubtless from a gaming standpoint should) be all sorts of ruins and the like littering the landscape between the Hollow Highlands and the Hestmark Highlands. Perhaps there could even be clues to the location of the Tomb of Horrors, but if I were doing a hex crawl here I would probably strive to avoid the obvious tourist-trap destination (ahem). Southern Sunndi is an obvious choice for a base, but I would probably go with Dullstrand, opening up the possibility of moving the campaign east to the Lordship of the Isles and the Spindrift (later Lendore) Isles.

The Flinty Hills are also a possibility, with the humanoids of the Bone March to the east. It’s not an entirely uncivilized region – Evaleigh’s (Gord’s first real love, from Saga of Old City) father is Count Blemu and maintains a large and well-defended castle just over the Harp River to the east, and also owes fealty to the King of Nyrond. We are told it is home to many halflings and gnomes – but the DM could dial down the civilization a bit and dial up the humanoids-have-overrun-everything feel. Bases of operations include Innspa, Womtham, and Knurl.

To the North, we have the Bluff Hills and surrounding region. This does have the most “edge of civilization” feel to it, with the Rovers of the Barrens to the north, lots of monsters and ogre bands in the hills themselves, and the whole is claimed by Fellands and Grosskopf of the bandit kingdoms, which doesn’t necessarily mean a well-regulated border region. Rookroost or Nevond Nevnend serve as bases of operations, but there are doubtless smaller towns within the two bandit kingdoms that could also be used.

The northern Vesve Forest and eastern Sepia Uplands could also serve as such a hex-crawl, with lots of potential for infiltration by agents of Iuz, and Wolf Nomads being a constant hazard. There are several mineral deposits within the hills, giving opportunities for lost mines and the like. Traft would be the likely base for PCs.

Finally, I submit that the area east of the city of Greyhawk is also a fine hex-crawl location, despite its fairly civilized status. The Mistmarsh is a trackless waste, and the Cairn Hills get much less civilized as one moves away from the city. Such a crawl could even go as far south as the Abbor Alz and the Bright desert (I’ve often thought the terrain around the city was deliberately designed for such a campaign, with its huge variety of terrain types). Bases include Greyhawk (obviously) and Hardby, which is a more interesting and less obvious choice.

6 thoughts on “Hex crawls in Greyhawk”