As I am working on my next project, a blend of Chinese mythology, folklore, history, and wuxia (kung-fu) literature and film, I find myself wondering whether to approach it as a unique game unto itself, or as a supplement for Adventures Dark and Deep™ (and thereby with most OSR-type games as well). There are arguments on both sides.

On the one hand, handling it as a game unto itself has the obvious benefit that it could thereby appeal to fans of the wuxia genre who might not otherwise be interested in the sort of Tolkienesque medieval European fantasy that Adventures Dark and Deep embodies. It would also obviate the need for flipping between two books to find needed information; no need to consult the Adventures Dark and Deep™ Players Manual for the description of a spell that happens to be the same for a wu as a cleric.

The downside is that players and fans of the original game would need to wade through a lot of duplicate material (the basic combat system, for instance, will be the same, as will certain character classes like the fighter), and would thus be paying extra for duplicate information. 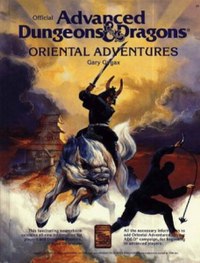 On the other hand, the concerns are somewhat reversed when the mythic China material is handled as a straight supplement. It would presuppose that players and the GM have some “base” set of rules to use with it, such as Adventures Dark and Deep, Labyrinth Lord, Swords & Wizardry, OSRIC, or even AD&D 1st Edition. Some folks are simply not into “traditional” fantasy RPGs, and they would be, if not cut out, at least dissuaded from partaking. Too, it would require a certain amount of flipping through multiple books to find information, the removal of which is something that the ADD project in general had in mind as a goal. It is somewhat odd to combine elements from six books into one, only to require a second book for play in a different cultural milieu.

The upside of handling such a thing as a straight supplement are likewise the inverse of the above. A supplement by its nature will be shorter, less expensive, and more focused. It also doesn’t add to the already crowded field of OSR RPGs, whose even most enthusiastic members must betimes roll their eyes at the announcement of yet another “restatement of Basic D&D with some changes” being published*.

So the question I would put to you is, do you prefer to see new self-contained rules, or supplements intended for use with other, already-extant (or the sort of generic OSR “Basic/1E compatible”) rules?

15 thoughts on “New Games vs. Supplements”