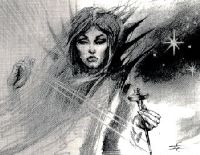 Having left off last time with Incabulous, the book now turns to Istus, the Baklunish goddess of fate. She goes from being a 14th level cleric, 14th level druid, 24th level magic-user, and 14th level illusionist to being just a 16th level cleric and 16th level magic-user. She also plummets from having 377 h.p. to 75! In addition, her companion/servant (a sort of time elemental mentioned in the Guide) has disappeared entirely. Her clerics have a little more descriptive text about their personalities, and have a new 6th level spell, enmeshment, which transports those affected to an extra-dimensional labyrinth of dread where they could be attacked by other prisoners, until they make a successful saving throw vs. spells (they get to save each round). Clerics of Fharlanghn should feel a little ripped off in the new spell department…

Iuz, the evil demigod who rules his own eponymous realm, is next. Here we see an important distinction, which isn’t really called out in the book so much as it is implied, as he doesn’t have an avatar, but rather only his true form. He does, however, lose his 16th level assassin status that he enjoyed in the Glossography (although he is still a 16th level cleric). His clerics are presented as, essentially, headhunters, with the number of skulls they have displayed an indicator of their status within the priesthood. They do have a unique 1st level spell, spittle (a reference to one of Iuz’s own powers), which can have some really serious consequences against enemies in combat (no attacks for 1d4+1 rounds, for instance).

Nerull is next. His avatar is oddly not so much lowered in power from the others; he only goes from 16th to 14th level as a magic-user and cleric, and loses his assassin levels. His hit points go from 400 to 90, though, which is certainly significant. His clerics get a new 5th level spell, ebony tendrils, which can hold enemies fast for 5 rounds unless they make an open doors check when first struck. Pretty nifty, but I might put it as 3rd level.

Pholtus is next, with his avatar losing 8 clerical levels and changing from an illusionist to a magic-user. His clerics go through something of a change; now it is specified that they must be lawful neutral in alignment, where before there was no distinction between the lawful (any) alignment of his worshipers and his priests. Their new 5th level spell, sunburst, which inflicts 6d6 h.p. of damage on undead and blinds other creatures. Quite the potent spell.

Ralishaz, the god of bad luck, has an avatar not that far removed from his own true form (we assume), losing only 2 levels as a cleric and switching from a 9th level illusionist to a 7th level magic-user. Everything else is pretty much the same, but clerics gain a new 2nd level spell, vicissitude, which will give the caster a +10%(or +2 on a d20 roll) chance to any roll, but which has a 5% chance per casting of backfiring and turning into a penalty. Nice, suitably powered, and it does fit the nature of the deity.

Ulaa rounds out the section on deities (which also omits Raxivort, Trithereon, and Wastri – one of my personal favorites – Xan Yae, and Zagyg). Her avatar is lacking 13th level fighter abilities, but is otherwise largely unchanged (except, of course, for hit points, which like all avatars seem to plummet to a third or less of the original). Her clerics’ additional spell is the 6th level command earth, which can either hold earth elementals (and associated creatures) at bay or attempt to charm them. It works both in terms of power and with the nature of the deity, but an argument could be made for making it a 5th level spell.

That brings us to the end of the section on deities. The avatars, I think, are a change for the worse. They’re severely under-powered and under-hit pointed, but yet they seem to have the weapons and powers of the actual deity in full strength. A more comprehensive explanation of the relationship between the real deities and their avatars would be most welcome – what we get is rather perfunctory and certainly doesn’t spell out certain salient details. We lose a number of deities altogether, and in some cases lose or change details which add character to their clerics. The additional special spells for each deity’s clerics are a good idea on the whole, but some of them seem ridiculously under-powered to the point where no one would reasonably choose to memorize them.

Up next: Monsters of Greyhawk.