Agents of SHIELD, the Inhumans, and the MCU 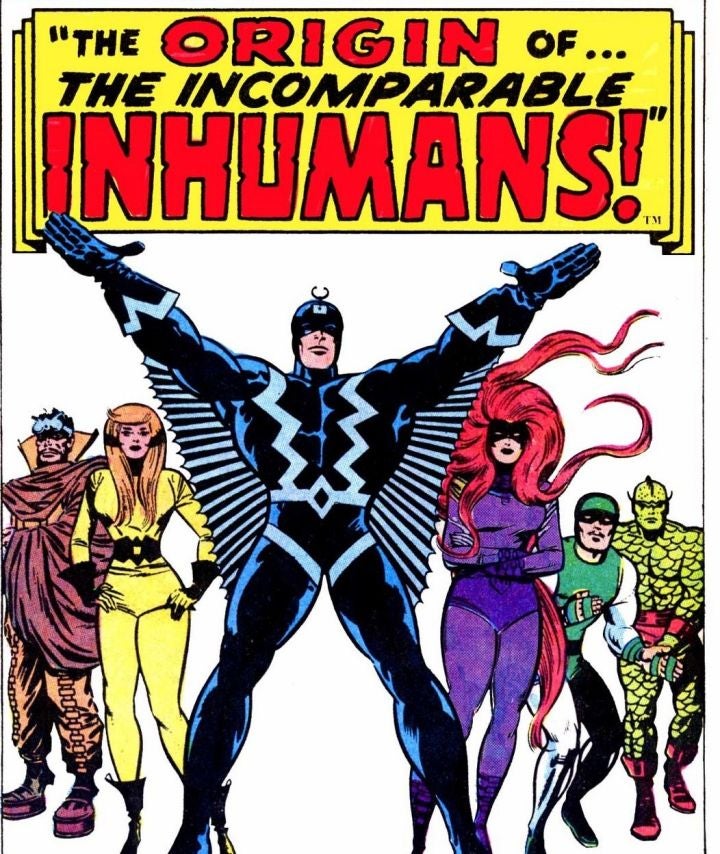 Speculation has been rife for months that Marvel’s Agents of SHIELD television show (now in its second season) is going to be introducing a new element into the Marvel Cinematic Universe (MCU); namely, the Inhumans.

This post is going to have some spoilers about recent episodes of AoS, so if you’re not caught up, caveat lector!

First things first. In the comic books, the Inhumans are the descendants of humans who were genetically modified tens of thousands of years ago by the alien Kree. The Kree, by the way, are the alien race that gave us not only the Host (the alien corpse in AoS that gives us the miracle drug GH325) but also Ronan the Accuser, the villain in this year’s hit Guardians of the Galaxy. The Inhumans live in a hidden city called Attilan, which has at times moved from the North Atlantic, to the Himalayas, to the moon, and then back to Earth. Because of their alien hybrid DNA, when a young Inhuman is exposed to the Terigen Mists (or crystals in some cases), latent superpowers are activated which can vary in strength and utility enormously.

The Inhumans are led by a royal family, headed by Black Bolt (whose voice is so powerful that speaking at all causes enormous devastation around him) and sometimes his criminally insane brother Maximus. And in the comic books, the mutant Quicksilver (as in the one we saw in X-Men Days of Future Past, and who will be in Avengers: Age of Ultron) married a member of the Inhuman royal family. So there’s an in-comic connection there already. Certainly the MCU isn’t required to cleave 100% to the comic book mythology, so making Quicksilver and Scarlet Witch Inhumans rather than mutants is certainly doable.

Because Fox has the rights to all things mutant locked up in their license to make X-Men movies, Marvel now has to look elsewhere for an equivalent. The Inhumans are the logical choice, as they’re functionally the same. They have many varied and potentially colorful superpowers, and can serve as a stand-in for morality stories about persecuted minorities.

Oh, and Marvel already has announced not only an Inhumans movie in November 2018, but also a Captain Marvel movie in July of that same year. Captain Marvel (in her incarnation as Carol Danvers, whom Marvel already said was to be the subject of the movie) is also an Inhuman (well, not technically, but she also has a hybrid of Kree and human DNA (and superpowers) for a different reason, so it’s close enough).

Agents of Shield (which has really upped its game since the shaky first half of the first season) last night telegraphed the existence of Attilan; the mysterious symbols that Coulson and most of the others injected with GH325 were carving weren’t intended to be 2-dimensional. They’re a 3-dimensional map of a city that the Host apparently died desperately trying to reach. And speaking of those symbols, doesn’t this close-up view of the new Inhumans comic book logo look a bit familiar?

There’s another piece of the puzzle that having Agents of Shield start up a major Inhumans story line fills in as well. When it was announced that Captain America 3 (May 2016) would be doing the “Civil War” story from the comics, some observers were puzzled.

The Civil War story line involved a “superpower registration act”. Some heroes were for it, and others were dead-set against it (hence the name). The trouble is, there just aren’t enough people running around the MCU with superpowers to really need a superpower registration act. The SHIELD agents we’ve seen have been extremely well-trained, but not super-powered. There are the Avengers, and a couple of others walking around, and doubtless some of the folks that HYDRA released from various SHIELD prisons like the Fridge (who probably wouldn’t comply with such a law anyway), but on the whole the MCU world just doesn’t seem to have the numbers to justify such a thing.
(As an aside, there’s also speculation as to who in the MCU is going to handle some key roles that in the comics were handled by characters out of Marvel’s control, like Spiderman and the Fantastic Four.)
Now, imagine if the existence of tens of thousands of Inhumans, with Kree-hybrid DNA and superpowers, was suddenly thrown into the mix. A superhuman registration act, like the one we’ll undoubtedly see in Captain America 3, suddenly makes a whole lot of sense. It would be aimed at the Inhumans (framing them as the persecuted minority in the exact same way that the Mutant Registration Act in the first X-Men movie did mutants), but would sweep up others in its wake as well, including Captain America, Doctor Strange, etc., and, if it included extraordinary technologies not generally available, Iron Man, War Machine/ Iron Patriot, Falcon, etc.
So, a very hypothetical Inhuman-centric timeline could look something like:

5 thoughts on “Agents of SHIELD, the Inhumans, and the MCU”