A Day of Pushing Lead and Cardboard 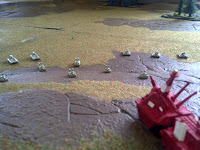 So yesterday was our second Wargame and Boardgame Day at our local FLGS, Mighty Titans Hobbies and Games, organized through the same meetup group that we use to organize the Greyhawk campaign. This second day was a blast, and we’ve resolved to make it a much more regular thing, every six weeks or so. (The next one will be on May 7th, barring anything unexpected; if you’re in or around northern New Jersey, you’re more than welcome!)

The premise of these events is simple; several of us bring along some games, either oldies-but-goodies or new-and-hot (or both). We then figure out what we want to play, and have at it! Simple, and a lot of fun.

We started off with a game of Nuclear War (Flying Buffalo), in which I was eliminated before the game began by the use of Secret and Top Secret cards. *grumble* I got a semblance of vicarious vengeance when the game ended in mutual destruction as the last remaining players wiped each other out with retributive nuke strikes. 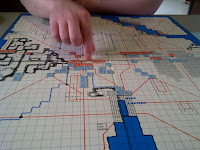 Then two of us played a game of Tactics II (Avalon Hill) while the others did a session of Starfire (Task Force Games). I’m embarrassed to say I don’t remember who won Starfire, but I managed to pull out a victory as the defending Blue nation in Tactics II. My undefeated streak continues. Red had me on the ropes early on in the game, as he had concentrated all his armored divisions into a fearsome strike force right down the middle of the board, but I managed to tie up enough of his other units on the edges and I was able to force a series of exchanges in the center. I was losing infantry and he was losing armor. Soon enough he didn’t have any left, and I encircled the remaining divisions in the center and went on to victory. 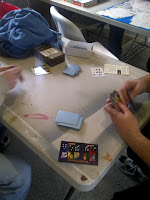 Starfire wasn’t over by that point, so several of us played a game of Scriptorum, at which I was severely trounced, but had fun nevertheless.

At this point, we moved on to the highlight of the afternoon, a game of Ogre Miniatures.

I’ve been getting my Paneuropean and Combine forces ready for the last two weeks, and while they weren’t in a perfect state, they were certainly playable. None of us had ever played the actual miniatures rules (although I and one of the other players had played the board game version many times), so we had a few missteps with the rules, but we had a grand ol’ time nevertheless. 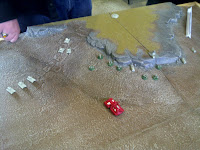 The FLGS has a number of wargaming tables with scenery, terrain, buildings, etc. and we made use of one of those with mesa-like hills on either end. Atop each hill we placed a command post, and each side had a Mark III Ogre, 48 points of infantry, and around 50 points of armor (both sides had the same forces for our first outing; 3 heavy tanks, 3 GEVs, 3 missile tanks, and a howitzer). We split into teams; one person on each team commanded the Ogre and the other commanded the infantry and armor. It worked very well. I commanded the Combine armor and infantry. 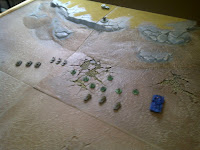 The Paneuropeans drew first blood, taking out one of my missile tanks with an overrun by two of their GEVs. we continued with a little skirmishing here and there, but the big action was the two Ogres that went straight at one another. The Paneuropean Mark III did an overrun attack against the Combine Mark III (basically ramming it) and got pasted for its effort, losing all of its weapons. At that point it was an easy thing to disable its remaining treads, and the Combine Ogre was still in fairly descent shape, with most of its treads intact and still sporting a few secondary batteries.

While that was going on I managed to scream my GEVs past the Paneuropean units and was racing for the enemy command post; the only thing between those units and the objective was the howitzer (which was about to come under fire itself by those self-same GEVs). Between that and the status of the Combine Ogre (which was able to move faster than any of the remaining Paneuropean units), we called the game in favor of the Combine. Victory! 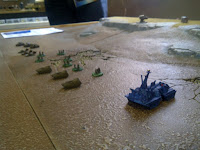 It was, of course, more of an experimental game to test out the rules, but it was great fun. I  was surprised by just how close units need to get to one another to be in range, and how fast some of them can move in a single turn. The rules themselves are pretty straightforward (we did have to look some things up in regards to the Ogre vs. Ogre overrun, but that was a pretty unusual situation). What I love about it is that some very complex and nuanced tactics can emerge from those pretty straightforward rules. Next time out, we’re going to have bigger and more varied forces, and hopefully we’ll give the rules an even more thorough run-through. But I think I can safely say that Ogre Miniatures has become a regular in our stable of games.

2 thoughts on “A Day of Pushing Lead and Cardboard”