March 20, 2011April 25, 2018 Greyhawk GrognardUncategorizedMiniatures, Ogre-GEV, RPG, Wargames5 Comments on The Ogre Project, Part IV – Playable Armies
As I noted earlier, we had our first opportunity to try out my new Ogre armies at an event at the FLGS this weekend. It was a great time, and I was very pleased with the way the figures themselves looked on the table. Got me itching to finish up the detailing, and paint up the remaining Ogres.

After getting the base coats on the various figures, I started to do some detailing on certain of the figures. Alas, time was against me, and I didn’t get to do everything I had set out to do, but it was certainly enough to have a couple of presentable forces on the gaming table. 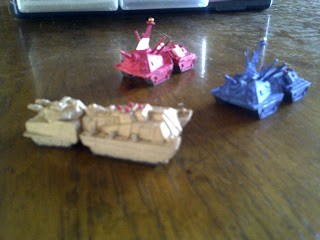 Here are two of my Mark III’s and a Paneuropean Fencer. The Mark III’s are done in a red-and-white scheme and solid metallic blue (with red tips on the missiles, which I’m planning on making a convention for all of my Ogre figures). The Fencer is in a light brown, which could work for either European or desert warfare. The red and white Ogre I’m planning on decorating with black iron crosses, and naming it “Richtofen”. 🙂 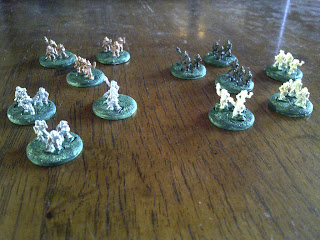 Here are some representative infantry bases, showing off the four main color schemes I’m using for the non-Ogre units; reddish brown and gray for the Paneuropeans, and dark green and light tan for the Combine troops. The bases themselves were done in a sort of hunter green. I considered doing them in a more muddy gray-brown (which I thought might better approximate an Ogreverse battlefield) but it ended up not looking all that great, and so “realism” gave way to appearance. It is a game, after all. 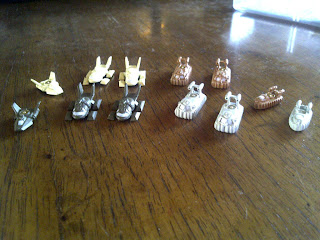 Here is a selection of GEVs and light GEVs, again from all four forces. The windshields are done in a periwinkle blue, which really shows up well on the dark green and red-brown units. The turbines (for both Combine and Paneuro alike, on all units that have them) are done in a bright metallic gold. That really shows up well (if you click to enlarge the photo, you’ll see it in several of the figures). 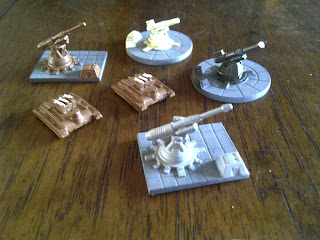 Howitzers and Paneuropean missile tanks. The howizers all sport dark gray bases, which I’m assuming are concrete set in place, and the missiles on the missile tanks are white. They’ll eventually have red nosecones and possibly black fins as well.

Coming up: I want to do all of the tank treads and plenum skirts of the GEVs in black, and would like to do some detailing on the infantry (making the weapons black, and putting some identifying coloration on the jump packs to point out marines and engineers). There are also an Ogre Mark III, a III-B, a Mark V, and another Fencer to do. I’ve got some ideas for color schemes for those, but everything’s up in the air. I’ll make another post when I’ve got more done. For now, I’ve got a few other battles to plan with these new armies.