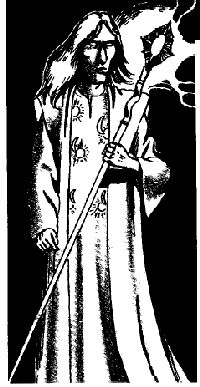 In regards to my review of Vecna Hand of the Revenant, Mystic Scholar raises the excellent point that Pholtus is, according to the established Greyhawk canon, an Oeridian deity, but is shown in the book as being the central deity of the Ur-Flan city of Fleeth. Also, in the graphic novel he is said to be the “god of moons”, but in the other sources he is known as the sun god. What to make of this?

Well to take the second point first, one of the often-overlooked elements of the Guide to the Flanaess from the 1983 “gold box” (p. 74) isn’t actually part of the text, but in the listing at the top of the entry describing the deity:

That pretty much answers that. Although he isn’t often thought of as anything but a god of sun and light, the original material does point to the link between Pholtus and the moon(s) – the moon(s) being the source of light during the night, of course (remember that Oerth has two moons, Luna and Celene). The misconception is undoubtedly helped by our modern interpretation of sun and moon as opposites, but in the mythology of the Flanaess, this need not be so.

At some point, Pholtus’ symbol changed from a silvery sun disk to one with a crescent moon in the corner. I confess I can’t immediately point to where this transition took place (anyone know when this changed? Please chime in, in the comments). Perhaps it could point to a regional difference?

But that still leaves us with the question of Pholtus’ provenance. According to the Guide to the Flanaess (p. 62-64), the “racial origin” of Pholtus is OC, meaning both Oeridian and “common in most areas”. The only guideline we’re given in terms of such mixed origins is a parenthetical notation:

(The careful reader will note that certain deities are both of a certain racial origin and common, at the same time.)

This seems to indicate that such deities did indeed have a specific racial origin, but subsequently disseminated throughout the various other races of the Flanaess to the point where they could be found in the various pantheons – Flan, Suloise, Oeridian, and Baklunish (although the question is open as to whether or not that means only those Baklunish nations proximate to the Flanaess, or the entire Baklunish Basin).

Now, the events of Vecna Hand of the Revenant are not precisely dated. But they certainly take place in the dim past of the history of the Flanaess. Indeed, far enough in the past to warrant a distinction between the Flan and Ur-Flan (the prefix “Ur-” coming from the German meaning “primitive or original”, and linked to the name of the Mesopotamian civilization called Ur). And the centrality of the worship of Pholtus in Fleeth stretches back at least a thousand years before its destruction, and doubtless many more years before that, because the priesthood of Pholtus is seen as dominant in Fleeth even during the childhood of Vecna. (I should point out that it’s an especially nice touch that the language spoken in Citadel Cavitius is “an ancient form of Flan”, which one may hope is was noted by Vecna Hand of the Revenant author Modi Thorsson, building on this snippet of information found in the previously-published adventures Vecna Lives and Die Vecna Die!).

It is certain that the Ur-Flan were possessed of a higher level of civilization and knowledge than the Flannae whom the Suloise and Oeridians encountered after the destruction of the Suel Imperium. So that bespeaks of at least many centuries transpiring. In Vecna Lives, we are told that Vecna predates the migrations, and possibly even the foundation of the Suel Imperium itself. So too, then, must the propagation of the worship of Pholtus to the Ur-Flan, as it is firmly entrenched as the chief faith of Fleeth in Vecna’s childhood, a thousand years before its fall. Presumably the migration of most of the other “common” deities from their provincial origins to a more cosmopolitan status happened during these early times as well.

So that gives us some very rough time-frame for the dissemination of the various “common” deities from their original ethnic backgrounds. If we take “before the migrations” as more reasonable than “before the founding of the Suloise Imperium”, and that “the migrations” refers to the Flan migrations beginning around -2000 CY, that gives us something in the very rough range of at least -3500 CY, and possibly quite a bit earlier.

The question remains… why? What was it that caused such a cultural diffusion without any sort of physical migration? Why then? And why only some deities and not others? A mystery indeed.