Review: Vecna Hand of the Revenant 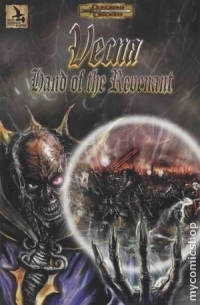 Apologies for the delay in writing up this review, as I got the book back in May and only now got around to reading it. I have to say this thing was well worth the wait, and its extreme rarity (and the fact that no sequels were ever made) is a crime against all Greyhawk.

Written by Modi Thorsson and published by Iron Hammer Graphics in 2002, Vecna Hand of the Revenant was to be the first in a series of graphic novels detailing the ancient history of the Flanaess, specifically surrounding Vecna, the arch-lich and source of the infamous Hand and Eye. (The Head of Vecna itself is, alas, apocryphal, although the story surrounding it may well be true.)

The book opens with Kas, right-hand-man of the lich Vecna (ahem) attacking the ancient city of Fleeth (a city of the Ur-Flan, held to be impenetrable because of its divine shield invoked by the priests of Pholtus). We jump back to a thousand years before, when Vecna himself was but a child, and learn that he can pierce the shield because he once lived in Fleeth himself, before his evil blossomed. A lot of the book deals with Vecna’s backstory; his childhood in Fleeth and subsequent path to become a great wizard. It also gives details on the inner workings of the priesthood of Pholtus (at least in the distant past), which could definitely give some interesting flavor to a contemporary Greyhawk campaign (especially the “Ritual of Light” which actually blinds the priests who conduct it!).

During the battle of Fleeth, we get to see how Vecna lost his hand and eye, and how the lich himself was saved by… Acererak, another name which should be familiar to Greyhawk fans (although this is before he himself became a lich). I personally don’t care for the incessant tying together of all the names and characters of Greyhawk into a single narrative, but it’s certainly a minor thing. The book unfortunately ends in the midst of the battle, just as Kas is poised to… well… in the interests of spoilers I won’t say, but it’s very much a cliff-hanger (but I will say it is not about his eventual betrayal of Vecna; this series seems to have been intended to go for several books at least).

The artwork by Kevin McCann is fabulous. The details of Vecna’s half-undead army are gruesome and lovingly drawn, and there are a lot of nice touches in terms of clothing and architecture to tell you that this is happening in the past, and not in the Flanaess of the modern era.

All in all, I dearly wish this series had been continued. There may not be too many details that a DM could use in a modern campaign (although some sort of time-travel adventure back to the time of Fleeth could have interesting results), but in terms of “deep background” this is a must-have.

I give it five wizards out of five.

6 thoughts on “Review: Vecna Hand of the Revenant”