Who Framed the Avengers?

April 26, 2014April 25, 2018 Greyhawk GrognardUncategorizedfilms7 Comments on Who Framed the Avengers?

For obvious reasons, there is a lot of talk in fandom about the various Marvel properties owned by competing film studios. Fox owns the X-Men and the Fantastic Four, Sony owns Spider Man, and of course Marvel itself owns the rest, including the Avengers, Guardians of the Galaxy, Doctor Strange, Ant Man, etc.

Bear in mind that the studios, although rivals, aren’t completely against the idea of doing cameos that cross studio lines. Apparently the Oscorp Tower almost made it into The Avengers (it was cut because by the time the building’s design was finalized, the Avengers NYC skyline had already been rendered, and there wouldn’t be time to include it). And because of a bit of contractual legerdemain, there will be a helping of shawarma relating to X-Men: Days of Future Past after the credits of the Amazing Spider Man II (but that isn’t indicative of any coming cross-over between Spidey and the X-Men).

Now, this begs the question, given the multi-billion dollar potentials with the Marvel properties, between Spider Man, X-Men, and the Avengers (not to mention Fantastic Four, etc.), why don’t the studios make some sort of deal to cross-pollinate their properties?

There is certainly precedent in Hollywood. Look at 1988’s Who Framed Roger Rabbit? 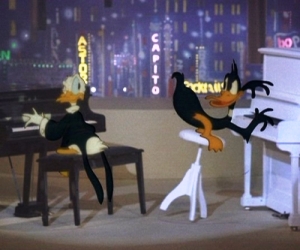 In that film, Disney kept control of the project, but arranged deals with the owners of Bugs Bunny, Daffy Duck, Felix the Cat, and Betty Boop to bring those characters (and more) in as cameos. In exchange, the owners of those characters got to stipulate how they were used (Bugs and Mickey shared a scene, as did Donald and Daffy), and I’m sure were handsomely paid, and everyone hailed it as a milestone not only of animation but of inter-studio cooperation. They had Steven Spielberg to argue their case, but Joss Whedon might do as well, given his recent track record.

I see no reason the same sort of thing couldn’t be done for the Marvel Universe properties. Fox has already said they’d be up for it.

What if the studios who owned the various characters arranged for very strictly controlled, limited, and reciprocal cameo appearances? Simple background stuff should be easy, assuming it can be worked out technically (as with the Oscorp building showing up in Avengers; surely the Avengers tower could show up as Spider Man swings by). It could be more involved than that. Wolverine gets a five-minute scene in Captain America 3 (reminiscing in a bar about World War 2?), and in return X-Men: Apocalypse gets a five-minute segment showing S.H.I.E.L.D. reacting to whatever the heck is going on, helicarriers and Nick Fury and all. If New York gets trashed in the new Fantastic Four movie, there’s a quick scene of Spider-Man webbing some debris out of the way before it crushes a baby carriage, and in return Doctor Doom is seen turning down the Sinister Six when they come to him for assistance. The details could be worked out, but it could be done.

The point is that these sorts of crossovers don’t have to be huge, multi-movie-spanning deals. Just a couple of minutes here and there, woven in and between the various studios, could not only cement the franchises as belonging to the same larger universe, but would also serve to raise all boats as people who like Spider Man might be a little more inclined to see Fantastic Four, and Avengers will pull in some more X-Men fans.

It worked for Roger Rabbit. It can work for Steve Rogers.

7 thoughts on “Who Framed the Avengers?”