Even though I’m probably best known for megadungeons, the style of play I personally prefer is the sandbox. The thing is, the sandbox, while it seems on the outside to be relatively simple (throw a lot of random stuff together, and let the PCs have at it), it’s actually one of the most difficult things to pull off properly.

Yes, this post is inspired by RPGPundit’s review of Isle of the Unknown.

Properly done, a sandbox campaign can be the most satisfying of all modes of play. It gives the PCs complete agency over what they do, where they go, and how they choose to interact with the environment. So, many GMs assume that the key to designing a sandbox is to present the PCs with a region (or an island, or a city, or something else that is geographically bounded in some way) that is stuffed with interesting things, and then shove them out the castle door and let them find things and have a wonderful time in the process.

This is a completely incorrect view of a properly constructed sandbox.

The first point that is missed is that all too often, one thinks that a sandbox means there is no plot. In fact, a lot of folks point to the sandbox as the “anti-railroad” and come to precisely this conclusion. This is perhaps the number one misconception about the RPG sandbox concept. There is indeed a plot. In fact, that’s one of the hallmarks of a well-done sandbox; there are many plots, all happening simultaneously. In fact, one of the best uses of plot in a sandbox campaign is to have several of them interact with one another on some level.

Having a bunch of stuff randomly strewn around without any sort of rhyme or reason doesn’t make for a good sandbox campaign. Perhaps a good funhouse campaign (and even my own Castle of the Mad Archmage has plots and factions and such that the PCs can interact with in a meaningful manner, and NPCs from whom they can gather valuable information about the dungeon, if they choose to do so), but “every hex is a new weird experience” isn’t a sandbox. It’s a funhouse. And after a while it doesn’t get fun, because there’s absolutely no way to predict what the next weird experience is going to be.

Now, before you go all “plot means railroad!!” on me, consider that the mere fact that plots (both in the sense of conspiracies and the sense of pre-planned stories) exist in a campaign does not compel the PCs to follow any of them. Which brings us to the second point…

Player agency cannot exist in a sandbox where the players are making blind choices.

Take, for instance, an island where each hex has a unique monster or some weird magical artifact. Nothing is tied to anything else, and the PCs are blundering from hex to hex and fighting monsters that rear their heads from the foliage, are fought, and then the PCs move on to the next hex. They might stumble on a dungeon, or a group of bandits, or something, but they are essentially flying blind with no idea of what’s out there.

In such a case, how can it matter, from the perspective of the PCs, whether they go north or east? They have no idea (and, more to the point, there is no way for them to have any idea) what the difference between going north and going east might be, so they flip a coin. That is not giving the PCs any sort of agency, and that is ultimately not a satisfying experience.

Now, however, imagine exactly the same island, but one where there are two competing cults of which the cleric is aware (in vague terms, possibly knowing their symbols and a snippet about each). The ranger’s mentor has told him of a ruined keep on the shores of a lake to the north, and the thief, as a member of the local Guild, knows about a group of bandits to the east that recently raided a caravan and captured a load of spices.

Now the party can at least make an informed decision about whether to go north or east, or to strike out to the west and see what they stumble across. If they happen to stumble across a shrine belonging to one of the cults, the cleric can chime in and possibly add some context; all the better if in that shrine they read a cryptic prophecy that points in the general direction of an abandoned mine to the northwest. And if they capture some of the bandits, they find that one of them has a tattoo marking them as a member of the other cult, and when pressed, he tells them about a secret meeting to take place three nights’ hence at a bluff overlooking the river. And so forth. 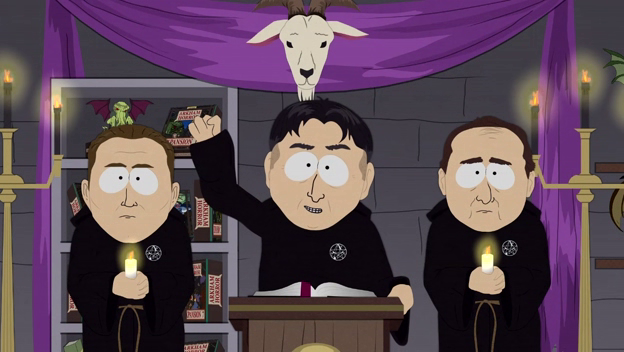 So, rather than just having a bunch of random, unconnected encounters, the tapestry of the sandbox now has at least three different strings that the PCs can tug on. Two of those strings, it turns out, are connected. If properly set up, there will be other strings out there, waiting to be discovered. Will the PCs start following the string that leads them to the mines, or will they choose to follow the one that leads them to the castle? And what happens if they choose one or the other? Perhaps in a month, if the cultist meeting is allowed to go forth unmolested, a greater threat will arise in the PCs base town. Which then turns into another plot string that they may, or may not, choose to tug on.

The point is that a properly constructed sandbox gives the PCs informed choices. There could be a dozen plot threads that they could choose to follow, or not, as fits their whim. Those choices should have consequences; if they ignore the fact that Hastur is going to be summoned When the Stars Are Right, they should at least have some chance to figure out that’s what they’re doing. “Oops! You didn’t go north, so the Old One has destroyed the town. Tough luck!” is exactly what should not happen.

That’s why sandboxes are so very difficult to construct. It’s actually much easier to design a railroad adventure. The PCs go from place A to place B to place C, and their actions and the broad outlines of the consequences are known. But a sandbox is a three-dimensional grid with a myriad of options. In order for the PCs to make sense of those options, they have to be given the information necessary to make a decision that is anything more than just a random flip of a coin.

22 thoughts on “On Sandboxes”