And now, at long last, we come to the “Monsters of Greyhawk” section. Taken as a whole, there really isn’t any reason that the creatures contained herein need to be specific to Greyhawk, with a couple of exceptions that are tied to specific areas of the Flanaess. The full list of new monsters is:

All but the changecat would show up in the later Greyhawk Adventures Monstrous Compendium supplement (unless my copy is missing a page – can someone double check?). In terms of presentation, we see again a split between 1st and 2nd edition, and it’s interesting to see that the monster entry format for the 2nd Edition Monstrous Compendium hasn’t been completely firmed up yet (“active times” for “activity cycle”, “habitat/society” becomes “niche”, and a “reaction modifier” that doesn’t appear in the later material). A lot of the artwork in this section is recycled from earlier works. 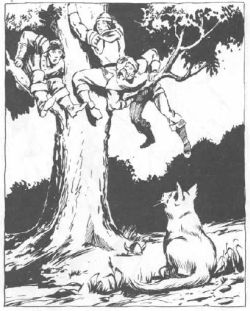 As noted, many of the creatures are generic and could have been included in any 2E monster book. Things like the beastman, the vampire cactus, the camprat, the changecat, etc. would be just as home in the Forgotten Realms as they would be in Greyhawk. Even the Crystalmist, while it is said to be most commonly found in the Crystalmist Mountains of the Flanaess, is found in any temperate or subtropical mountain range, and its link to the setting begins and ends with the name (which, given that it’s not particularly tied to that specific mountain range, seems odd).
One of the most interesting creatures is the Greyhawk dragon. Highly magical and by nature a shapechanger, Greyhawk dragons tend to live their lives in large cities (the largest cities might have only one or two dwelling there) disguised as a human, usually a patron of the arts and letters. I think this is where my own house-rule that dragons can polymorph themselves into humans or demihumans at will comes from.

Another creature that is tied specifically to the Greyhawk setting is the swordwraith, which is a special sort of undead only found in the Stark Mounds between Geoff and Sterich. They drain one point of Strength with each hit (shades of the various demi-human vampires in the later Ravenloft Monstrous Compendium supplement), and exhibit highly organized tactics befitting their in-life occupations as mercenaries and soldiers. Although they’re given the nickname Stark Mounds Undead Spirit, they can be found across any battlefield, which I find disappointing, as it could have been used to give that particular corner of the setting a little color.
Indeed, I think that is the byword of this section of the book – colorless. The monsters themselves are rather generic, and whenever there is an opportunity to use the monster to give a region of the Flanaess some background and color, it is squandered by the incessant need to make sure that each creature is found everywhere. While I realize that this makes them of broader utility as monsters, it most certainly lessens their effectiveness as tools to differentiate the various regions and areas of the Flanaess.
Next up: the Hall of Heroes