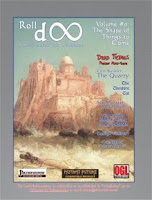 A consortium of several different gaming and media companies has put together a new quarterly multi-platform gaming magazine called d-∞, which promises to cover a broad array of gaming systems, including D&D 4E, Pathfinder/D&D 3.5, Labyrinth Lord, Mutant Future, and other independent games.

I confess I like broadly appealing magazines of this type on a number of levels. Even if I don’t personally use all of the articles directly, this sort of thing does give me a chance to keep a finger on the pulse of games I don’t necessarily play myself, and promotes the sort of cross-fertilization that I think is an important part of gaming in general (and the OSR in particular). I’m naturally thrilled to see games like Labyrinth Lord and Mutant Future mentioned by name (and in fact, the free promotional issue has an article specifically geared towards LL/MF, featuring six new spells dealing with the creation of new creatures). This all-inclusive editorial policy reminds me of the early days of The Dragon and White Dwarf, before they were turned into house organs almost solely for the promotion of their respective publishers’ material.

The preview “Issue 0” was apparently given out as a Free RPG Day promotion, but you can download the 16 page pdf from DriveThruRPG. It’s most definitely worth a look, and I’m looking forward to see how the content fleshes out in future issues.